George Letsios is the way to go (in memory) 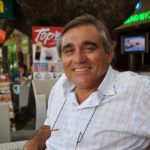 George Letsios was born in 1958. First he worked as a taxi driver in Athens. In 1992 he moved from Athens to Pirgos, Ilia, Greece. He lived in Varvasena, between Pyrgos and Ancient Olympia.

George was working on tourism industry since 1982 as a taxi driver. First in Athens first and after 1992 in Pirgos. He worked as private taxi tours to Olympia for cruise ships at the port of Katakolon. He acquired the needed experience to organize unforgettable tours for clients and their families. Every visitor can easily read hundreds of reviews about his job, on the Internet, the message Boards of cruise-critic.com, website, trip advisor etc.

The later years of his life were devoted in order to work as responsibly as he could. Over-seeing the details of a private taxi tours from clients position, learning from him and becoming better in his job, from year to year in the greater Ancient Olympia area.

We will remember him for ever.

A Great day with Takis Tsaparas

Takis Tsaparas was born in 1974 in Germany. He moved back to Greece with family in 1981. Attended college in 1998 and then he joined the Greek’s army NATO Forces.

Ending the mandatory services he started working as a taxi driver in his father’s taxi.

Meeting George and started working with him on private tours since 2002 gave him a whole new dimension in his work: meeting new people and having the opportunity to show them the beauties of the area. Because, if you need a private tour, “off the beaten path”, then Takis is the way.

Enjoy the friendliest and most informative tours to Ancient Olympia from the cruise port of Katakolo in style, in luxurious class taxi cars.

Takis Tsaparas and his team of excellent drivers, will show you the secrets and the beauty of the area. Our job here is to guide you and help you experience the true Greek hospitality, culture and civilization.